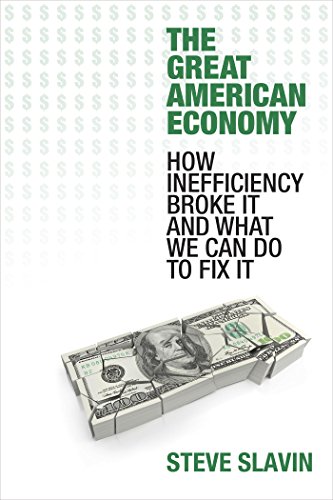 Many Americans feel that the economy is no longer working for them and that “the American Dream” has become a sham. This book explains the underlying reasons for this gloomy outlook and lays out a clear plan for making the American economy work for everyone, not just the top one percent. The heart of the problem, says economist Steve Slavin, is gross inefficiency. Since the end of World War II, America has been wasting vast amounts of its resources. As examples he cites the following key sectors: -Healthcare–we spend nearly twice as much as other industrialized nations but achieve no better results; -Education–just half of our eighteen-year-olds can function at an eighth-grade level, while many European and Asian countries do far better educating their young people; -Transportation–by relying on cars instead of mass transit, we spend much more than comparable nations; -The military–several decades after the Cold War our military budget continues to be almost 40 percent of the world’s total military spending, while few politicians ever question the necessity for such massive outlays. In these areas and other sectors of the economy, Slavin proposes sweeping changes to eliminate inefficiency. These would include a restructuring of our healthcare system to make it affordable for all, a major push toward public transportation, increased emphasis on quality results from our education system, ways to eliminate waste throughout our vast military-industrial complex, and a renewed emphasis on manufacturing. Refreshingly clear and readable, The Great American Economy will appeal to readers who want to learn what went wrong with our economy and how to fix it.